Who said "Yesterday is history tomorrow is a mystery today is a gift"? 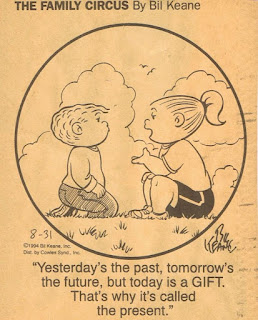 There are a couple different known phrases used including:
"Yesterday's the past, tomorrow's the future, but today is a GIFT. That's why it's called the present."
Bil Keane is usually credited with this phrase for use of this quote in the caption under The Family Circus newspaper cartoon from 8/31/1994. You will see below Bil Keane may not be the original author.
Another rendition people have adapted includes: "Yesterday is history. Tomorrow is a mystery. Today is a gift from God, which is why we call it the present".
It is due to this particular version I found it appropriate to create my own version for the academic community.

You heard it here FIRST:
"Yesterday is relative, tomorrow is speculative, but today is electric. That's why it's called current"
- By Travis Dultz 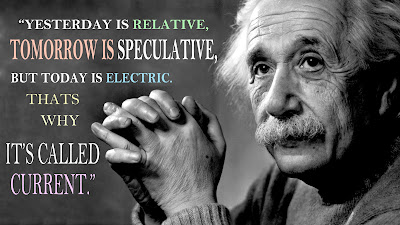 Below is a brief history about the (original) phrase origin as shown on the Dedy Kurniawan Wijaya blog site:
Who said "Yesterday is history tomorrow is a mystery today is a gift"?
Well, I'm not sure but  I found the following...

The full quote often reads: "The clock is running. Make the most of today. Time waits for no man. Yesterday is history. Tomorrow is a mystery. Today is a gift. That's why it is called the present."
In the 1902 book, "Sun Dials and Roses of Yesterday: Garden Delights..." by Alice Morse Earle, it is noted that the words "Time Waits for No Man" is a play on words or punning device of "gnomon" that has been used on sun dials. A gnomon is a pointer on a sun dial. Somewhere along the way came the full quote which has been truncated by some to your version.
Many believe the phrase has its root in "Time and Tide wait for No Man," meaning no one is so powerful that he can stop the march of time.

According to "The Phrase Finder":
The origin is uncertain, although it's clear that the phrase is ancient and that it predates modern English. The earliest known record is from St. Marher, 1225:
"And te tide and te time þat tu iboren were, schal beon iblescet."
A version in modern English -- "the tide abides for, tarrieth for no man, stays no man, tide nor time tarrieth no man" evolved into the present day version.
______________
Another version believed that it was said by Eleanor Roosevelt...
Many people will walk in and out of your life, But only true friends will leave footprints in your heart. To handle yourself, use your head; To handle others, use your heart. Anger is only one letter short of danger. If someone betrays you once, it is his fault; If he betrays you twice, it is your fault. Great minds discuss ideas; Average minds discuss events; Small minds discuss people. He who loses money, loses much; He, who loses a friend, loses much more; He, who loses faith, loses all. Beautiful young people are accidents of nature, But beautiful old people are works of art. Learn from the mistakes of others. You can't live long enough to make them all yourself. Friends, you and me.... You brought another friend.... And then there were 3.... We started our group.... Our circle of friends.... And like that circle.... There is no beginning or end.... Yesterday is history. Tomorrow is mystery. Today is a gift. (Eleanor Roosevelt)

Wiki answer also got the conclusion that those quote was said by Alice Morse Earle....
"The clock is running. Make the most of today. Time waits for no man. Yesterday is history. Tomorrow is a mystery. Today is a gift. That's why it is called the present."
Alice Morse Earle

Email ThisBlogThis!Share to TwitterShare to FacebookShare to Pinterest
Labels: phrase origin, Yesterday is history tomorrow is a mystery today is a gift, Yesterday's the past tomorrows the future today's a gift
Location: Hollywood, Los Angeles, CA, USA

New comments are not allowed.